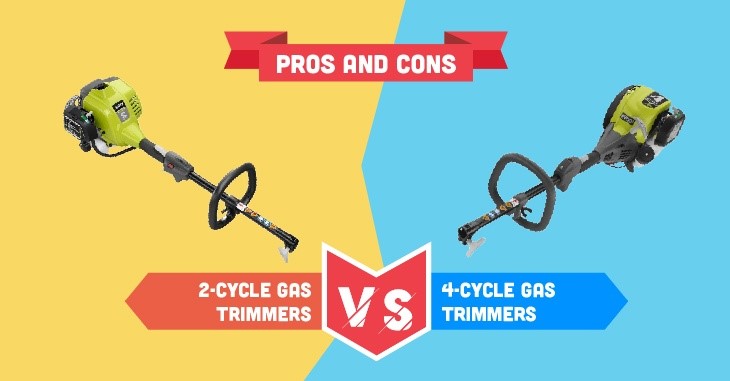 2 Cycle VS. 4 Cycle String Trimmer: Which Is Best For You?

Finding a new trimmer is no easy task. First, you have to decide whether to go with a gas trimmer, a corded electric trimmer or a cordless one. Once you’ve finally decided which type to buy, you’ll then proceed to consider other factors like shafts shape and the likes.

If you choose to buy a gas trimmer, you’ll still be faced with one vital decision: do you go with a 2 cycle model or a 4 cycle model? Wait. Is there even any difference between these two? Which would be better for you?

If you’re wondering all these, then it’s a good thing that you stopped by. We’ll be discussing all the cycle models here, including their differences, strengths, and weaknesses.

Also known as strokes, the number of cycles is used to refer to how many strokes are necessary for the engine’s pistons to produce power. Of course, a 2-stroke engine generates power with every two strokes while a 4-stroke engine requires four strokes.

Traditionally, 2 Cycle engines are more straightforward and suitable in smaller machines such as trimmers and lawnmowers. Meanwhile, 4 Cycle string trimmer are typically more substantial and found in cars. Even so, 4 Cycle engines are sometimes used in smaller garden tools. Let’s look at the strengths of each one of them.

Strong Points of a 2 Cycle Engine

As far as all other factors are firmly in place, that is the engine and fuel; a 2 Cycle engine produces more power than the 4 Cycle engine. This is because only two strokes is required to produce power and so the 2 Cycle engine does not have to do too much work to produce excellent output.

On the other hand, a 4 Cycle engine does more work and so produces less power.

Because 2 Cycle engines are less complicated, they don’t cost too much to make. Consequently, the buying cost of machines with this kind of engine is less than that of 4 cycle engines.

The heaviest part of a trimmer is the engine. Therefore, it is safe to say because 2 Cycle engines are more straightforward and weigh less, tools with this kind of engine are less weighty than their 4 cycle counterparts.

Another advantage is that a 2 cycle engine is simple. Its moving parts are few. Therefore, things can hardly go wrong. A 4 cycle engine is more likely to fall apart because it has more complexities. Parts can easily break down and need repairing.

Strong Points of a 4 Cycle Engine

While a 2 Cycle engine will produce more raw power than the 4 cycle engine, it burns up more fuel to achieve such a feat. Exhaust gases are never fully expelled in a 2 circle engine. Some gas is even expelled without being used. This is not very efficient.

On the other hand, the 4 Cycle version works in a way that saves fuel. It is a more efficient option.

A 4 Cycle engine defeats the 2 cycle engine when it comes to noise. A 2 cycle engine creates a small, loud explosion with every downstroke. Though the same thing happens In the 4 cycle engine, the sound happens inside the engine, so it does not make too much noise on the outside.

Though the two engine uses gas to power themselves, a 4 Cycle engine is slightly more environment-friendly. However, a cordless trimmer is the best in terms of pollution.

A 4 cycle engine self-lubricates while it is running, as long as the oil is topped up. It doesn’t need a mix of oil and gas. You need to add them separately. A 2 cycle engine cannot work like this. It needs a mix of gas and oil to function. So in this regard, the 4 cycle engine is the champion.

While both engines will get the work done, we’ve seen that they have a few differences. Now, choosing the best one depends on you because there is no best option. It all depends on what you value in your engine.

If what you want is a simple, robust machine and you’re ready to cope with noise or extra pollution, a 2-stroke engine will do. If you don’t like noise, however, and would prefer a more efficient machine you should go with a 4-stroke engine.