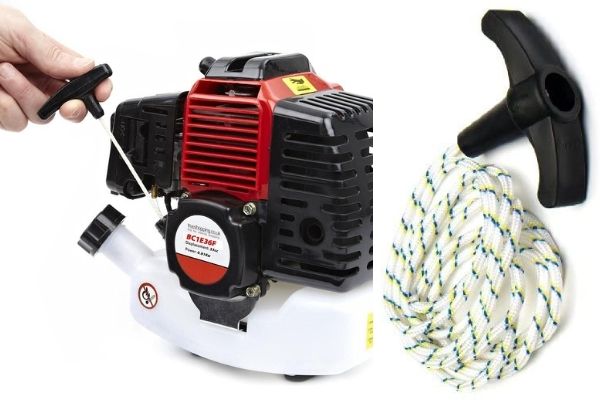 How To Fix Pull Cord on Petrol Strimmer?

A petrol strimmer uses a 2 or 4 stroke engine that has a recoil start. This startup is similar to a lawnmower. However, the pull cord in a mower is generally located on the external side of its engine. So, you can easily access it.

On the other hand, the starter in a trimmer is hidden inside the engine housing. So, you might need to remove the clutch assembly and some other parts if you want to reach it. We suggest that check the trimmer’s user’s manual to know the right process.

What Could be Wrong With a Pull Cord?

A pull cord can cause problems due to three common reasons. Either the rope is broken or it’s stuck. Or there are chances that it’s not retracting properly. You need to access the recoil mechanism to fix any of these problems. But, you can try to give the cord a hard tug if it’s stuck. 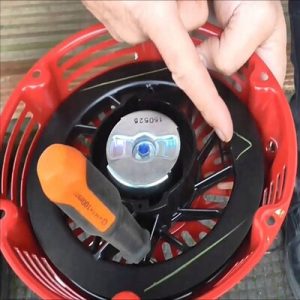 If the cord is not retracting, then there might be something interfering with the recoil. Or the spring might be broken, which you can replace by accessing the recoil mechanism. 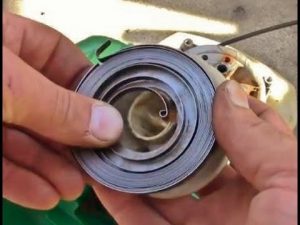 Bind the engine: Take out the spark from the engine and tape it to the engine’s housing using duct tape. You need to use the tape to keep the spark plug out of your way.

Remove the shaft: If the starter is fitted behind the driveshaft, then the first step is to remove its screws using a screwdriver and then you can pull the shaft. If there is a throttle, then disconnect its connecting wires first. Take out the clutch housing and plate to inspect the starter.

Take out the Clutch Plate: Wedge the flat end of a screwdriver on one of the clutch plates and use a hammer to tap it. This step will free the clutch plate and then you can unscrew it by hands. Follow the same process to take out another clutch plate.

Disassemble Motor Housing: Take out the screws that keep both the motor housing halves to access starter assembly. You might need to remove a plate as well depending upon the make and model.

Check the Recoil Mechanism: A pulley is generally fitted with the shaft using a retaining ring that you can take out by hands or with the help of pliers. There is a spring right below the ring. Take out the ring and pulley. Now you will see a recoil spring. If this part needs replacement, then choose a kit that includes spring and its housing. Fitting a new spring into old housing might be tricky.

Replace the Cord: Put the recoil spring at its designated place, then align the pulley on the shaft and push it down. Spin the pull five or six times counterclockwise while pushing it down to maintain tension.

This step wing up the spring. Take out the existing pull cord using a needle nose-plier. Feed one end of the new rope through the housing and then the handle. Another end of the rope will go through the recoil pulley’s hub. Tie knots on both ends then wind up the cord in its pulley.

Reassemble the Recoil Mechanism: Replace the pulley cap and its spring while maintaining tension on the pulley. Once you are done, let the pulley recoil, so that it can wind up the starter cord. Reassemble the trimmer.

You can accomplish all the above-given steps in few minutes, especially if you are an expert. Performing the repair or replacement without contacting any professional saves you a lot of money.

How To Use A Petrol Strimmer?