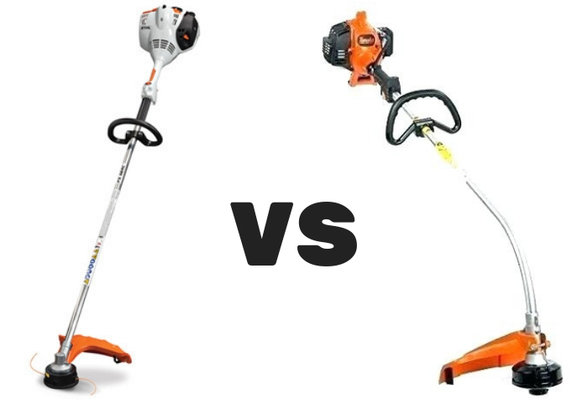 Trimmers come in various brands and with different power sources. These are some of the factors that make choosing a new weed eater difficult. Even after you’ve decided what the power source would be, you would have to consider whether to go for a straight trimmer or a curved one.

There are some significant differences between a curved and a straight trimmer. What are these differences? These two trimmers will, and their differences explained in this article. Read on.

Irrespective of whether you choose an electric 4 cycle string trimmer or a gas-powered one, there are only three fundamental differences between a straight and a curved trimmer. The first difference is obvious in the trimmer’s angled heads. The second difference has to do with the weight and size of both tools. The last difference lies in the way both machines work internally.  Now, let’s consider them one after the other.

Generally, straight trimmers are much larger and heavier than the curved ones. Though they may be hard to carry, they’ll give you a longer rich. Meanwhile, curved trimmers are not as long. They’re also much lighter and can easily be carried.

In trimmers, drive chains are what link the motor to the head and make the strings spin. Because the drive chain in a curved version requires bending, the durability of the machine becomes affected negatively. Straight models need no bending. As such, they last longer.

A curved trimmer has a curved head. This curved head makes the trimmer more manageable and also more comfortable to work with. They are, however, more challenging to keep level. On the other hand, a straight trimmer will go under obstacles like furniture easily.

Typically, curved trimmers have better balance, they’re not too weighty, and they’re much easier to use than the straight models. They’ll do a great job of trimming yards and tackling other light works with power and accuracy.

If you are working for a long time, these versions are suitable because it is lightweight and easy to wield. Also, storing or transporting them is never a problem since they’re small.  Apart from that, they’re the less expensive option, so if you choose to buy it, you can save some money.

Because curved trimmers have curved heads and their drive chain needs to bend, they are generally more susceptible to early damage. Curved trimmers also have less torque and produce less cutting power because of this same reason. As such, they can’t do any heavy work.

Though they’re simple to use, curved trimmers are generally not compatible with accessories. Unlike straight trimmers, curved models can’t be attached to an edger or pole saw. Besides, they are short and can’t offer a long reach. Plus, it is difficult to keep them level.

In terms of length, straight trimmers have the edge over their curved counterpart. As such, they offer longer and better reach. Tall gardeners won’t need to bend to get to some spots. They produce more cutting power and can survive heavy-duty jobs.

Also, they can work with various attachments. Thus, unlike the curved trimmers, they are versatile. Straight models last for long since their drive chain does not go through too much stress.

Like curved trimmers, straight trimmers too have a few cons. Apart from being a more massive option, they are also harder to manage. They take up more space and are not as well balanced as the curved trimmers.

They are also more expensive and tend to kick debris up while working. If you decide to work with this trimmer, you’ll need to wear protective clothing.

So, Which Trimmer is best for you?

There is no best option. There is only the best option for you. If you have a small yard and would like a weed eater to do some infrequent grooming, you should go for a curved model. They’re appropriate for light works and well suited for people who are not so tall.

If, however, you intend doing some heavy gardening or you’re a tall person and would like to use your tool every day, choose a straight trimmer.

Each trimmer has its peculiarities, pros and cons, and you’ve seen that from this article. Now, you can make an informed choice when you set out to choose your new trimmer. Make sure you have the right budget and be ready to maintain whichever tool you buy. Meanwhile, have fun choosing a new trimmer!

What is The Difference Between Hydroshot 20V And 40V

2 Cycle VS. 4 Cycle String Trimmer: Which Is Best For You?